There aren’t other games at Slotblox slot released so far, which adds to its uniqueness and originality. The game is designed by the software provider Ash Gaming which has added an interesting bonus feature that gives players the chance to win some extra prizes. Check out the rest of the details about this fixed-odds game inspired by the classic block-based arcade game Tetris below.

Following the gameplay of Tetris, the Slotblox is designed with no reel set and no paylines. It is a very straightforward and easy-to-play game since all buttons are placed at the bottom of the game screen. As there are no paylines in the game, all you need to adjust before pressing ‘Play’ is to set your stake for the round.

Once you have selected your stake, you can start playing by pressing the green ‘Play’ button in the bottom right corner of the screen. The blocks start dropping down and, hopefully, they’ll complete lines to get your winnings. Slotblox doesn’t offer bonus features.

The design of the game is pretty simple with the screen being divided into three sections. On the left, you’ll find the section displaying the possible wins with the game’s logo in the top part of the screen.

The middle section is where all the action in the game happens. This is where the blocks drop from the top to hopefully complete single, double, triple or quadruple lines awarding your payouts. The leftmost section gives players information on their stake, winnings and number of free plays. 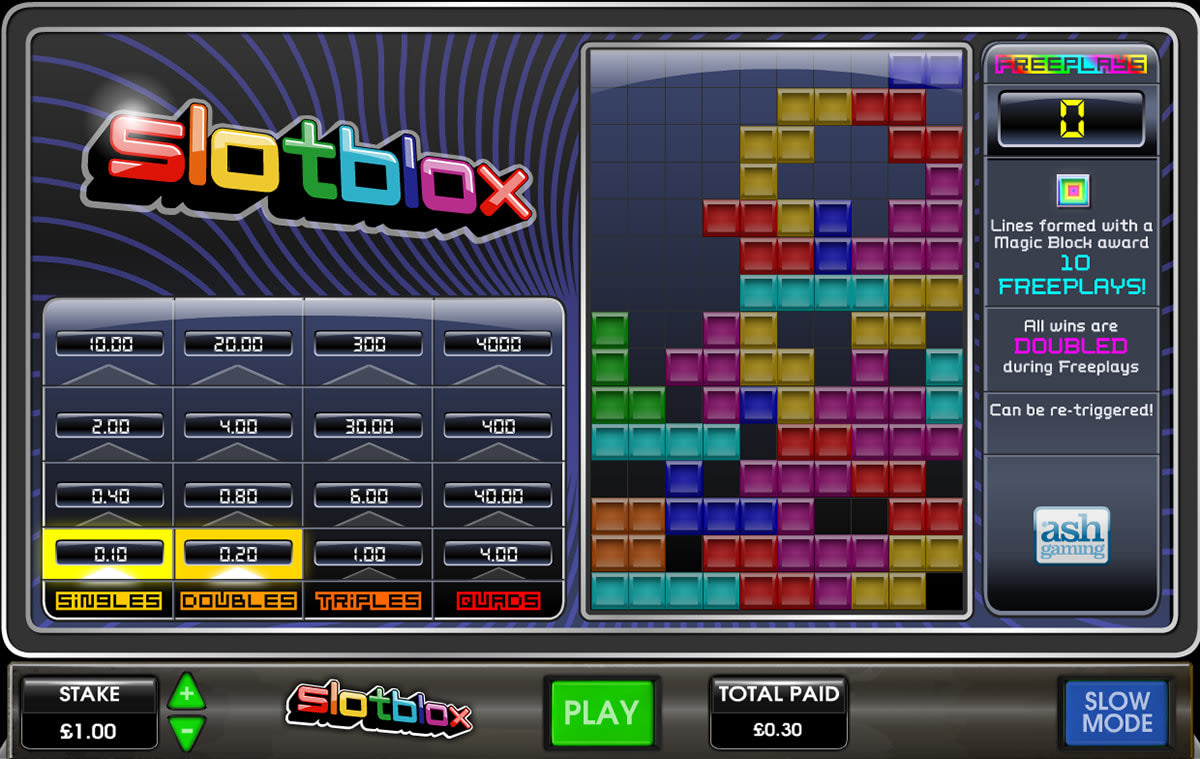 The gameplay is accompanied by simple sounds and non-animated graphics which adds to the arcade-like quality of the slot.

When it comes to the symbols in the game, SlotBlox doesn’t make use of any. Instead, as described above, it uses blocks of various shapes and colours to form complete lines which can get you certain payouts. These payouts are dependent on the number of completed lines which can be single, double, triple or quadruple.

When it comes to the additional symbols in the game, SlotBlox slots have neither scatter symbols nor wild symbols. However, the game uses a bonus symbol which is used to trigger the slot’s bonus game.

The Slotblox RTP is set at 94.50%, which may seem low, but it is still a different type of game. The volatility is unknown, however, if you want to look into its definition, you can take a look at our variance, volatility and RTP guide.

Gameplay and Features on Slotblox Slot

There is only one bonus feature, so let’s see the details.

As mentioned in the sections above, the SlotBlox slot makes use of a bonus symbol, the Magic Block symbol. This symbol is the key to the Free Spins feature which is activated when one or more rows are completed featuring a Magic Block. When this happens, you’ll be awarded 10 Free Plays.

Once the current round is finished, the game will automatically enter the Free Plays mode, the background colour of the screen will change with a message flashing up displaying ’10 Free Plays’. Any win during this feature will get a 2x multiplier.

Ash Gaming was founded two decades ago in the UK and since then they have created quite the name in the online gaming industry. Playtech noticed their high-quality work, so they acquired the provider. Popular titles include the Alices Wonderland slot, the Vikings Of Fortune slot, the Who Wants To Be A Millionaire slot and more reviewed on Slotswise.

To sum up, Slotblox can be the right game if you want to pause the standard video slots. The bonus round adds to the fun of this game, and the multiplier that comes with it can make it even more engaging. To try a Slotblox demo, you can look into some of the online casinos we recommend on Slotswise.

Discover the Slotblox slot by claiming a welcome offer right from this page and play at top-rated online casinos.

Codex of Fortune – Read between the lines and win big!

For the developer of this level Miss Cherry Fruits Jackpot Party is a remarkable game that’s made it to the lobbies of many gambling sites....

When it comes to mythology and the fantasy genre, dwarves have always been presented as master miners and craftsmen. Now you have the opportunity to...

Just like the original, this version is a 6-reel MegaWays™ slot featuring Falling Wilds Re-Spins, a Wild on Wild feature, and Free Spins with 3...

Overview Due to its relative isolation, the Yucatan Peninsula was apparently able to develop a distinct culture up until fairly recent times. Since Yucatan’s Mystery...

You may have missed