Anyone familiar with the Chinese culture will tell you immediately that the number eight is considered a lucky number. 88 Fortunes slots is a Bally Technologies title which has been designed with a progressive jackpot element. The game has a Chinese luck theme with a Fu-Bat Jackpot feature where you need to land three of the Baby symbols to win one of the four progressive jackpots. The slot also has a Free Games feature that gives you ten free spins initially, with the possibility of triggering additional free spins endlessly.

With the reel set designed having five reels in three rows and a total of 243 ways to land a win, you can have a spin from 88p to £88 a spin. Playable across mobile and tablet devices, this online slot is the perfect chance to find out if the Chinese theme will bring you much luck.

The reels of the slot take the central part of the screen with the game logo at the top centre of the reel set. The predominant colour is red which can be found throughout all features in the game. The buttons of the game are placed in the bottom right corner of the screen just below the available jackpots.

When the reels of 88 Fortunes slots are in question, they are decked with low-value and high-value symbols.
The group of low-value symbols includes six standard playing card symbols – 9, 10, J, Q, K and A. All of them award payouts for combinations of three, four and five matching symbols landed on an active payline. They are in a different colour set against a red background.

The group of high-value symbols includes five theme-related symbols like a bird, a ship, a turtle, a fountain and the Chinese lucky coin. You can bet at five different levels in the game and at each level, one additional on-theme symbol will be gold with a higher value. You can see your active gold symbols in the top left corner of the screen. These gold symbols also determine which jackpots can be won.

The game includes two additional symbols, a wild and a bonus symbol. The Fu Bat icon is the wild symbol in the game, appearing only on reels two, three and four, and substitutes for all others. The gong is the bonus symbol which is used to trigger the main feature in 88 Fortunes.

How To Play 88 Fortunes

Operating 88 Fortunes slots is quite easy and straightforward since all buttons in the game are marked well and positioned on the sides of the reel set.

Before spinning the reels of 88 Fortunes, you need to set your total bet for the spins. Since the 243 ways to win are fixed, the only variable that you need to set is the bet per spin.

By pressing the minus and plus buttons from the BET PER SPIN box, you can select one of the 9 available coin sizes for the bet per spin. In addition, you can also select the number of gold symbols you want to play, which are required if you want to have a shot at the four jackpots in the game.

Once you have set your total bet per spin and the gold symbols, you can set off the reel set by pressing the Spin button on the centre-right. The reels start spinning, hopefully forming winning combinations.

How To Win 88 Fortunes

As we mentioned in the text above, line wins in 88 Fortunes are awarded for landing symbol combinations on an active payline. Both the high-value and low-value symbols in 88 Fortunes slots award payouts for combinations of three, four and five identical symbols on some of the 243 ways to win.

An interesting feature of this slot is that all low-value symbol and four of the high-value symbols award the same payouts. So, the six card symbols, the fountain, the turtle, the ship and the bird, all award 5.00, 10.00 and 50.00 for the said number of matching symbols. 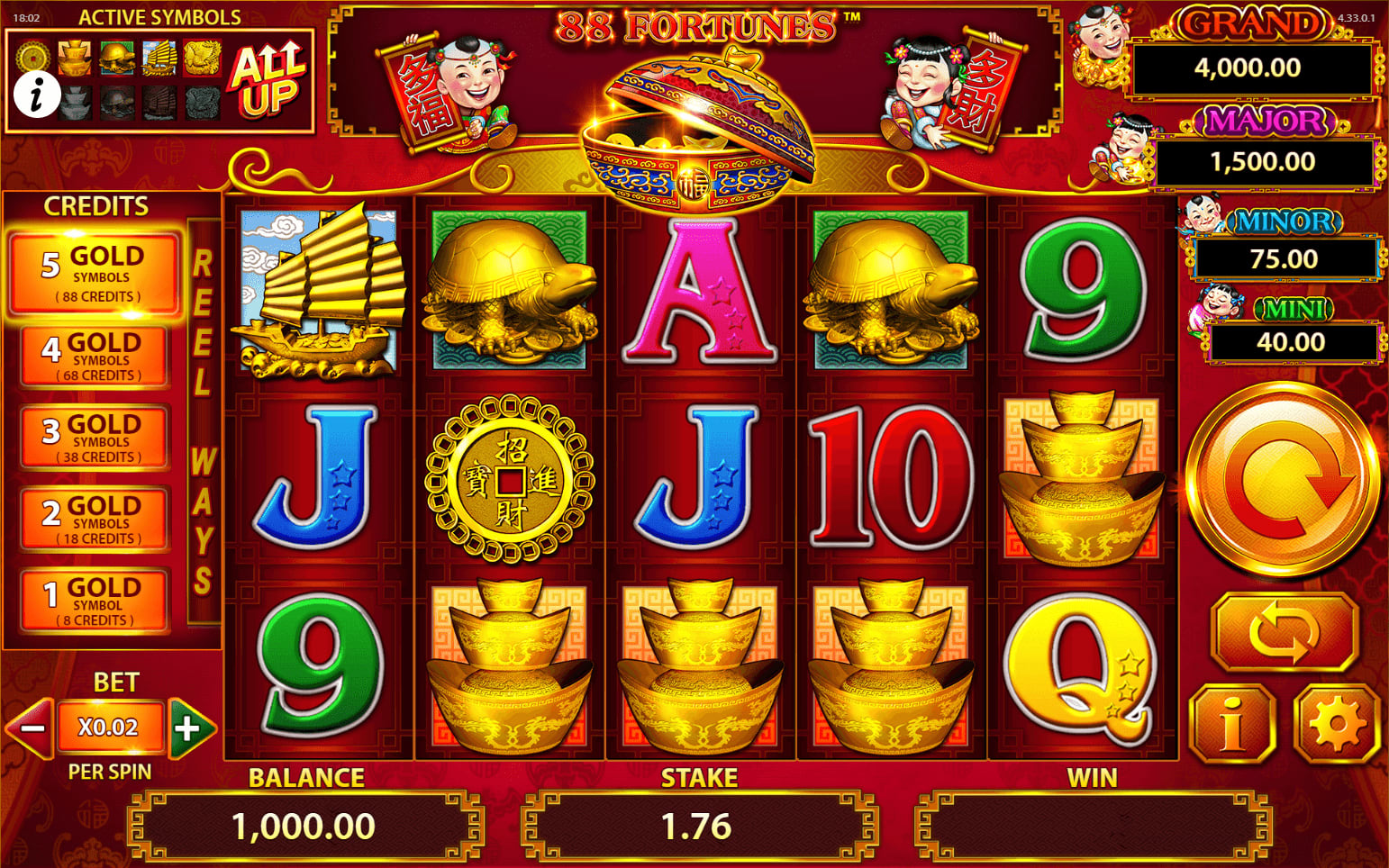 Whenever a wild Fu Bat symbol lands on the reels, there is a good chance that the jackpot round in 88 Fortunes will be triggered. If you are lucky enough, you’ll be taken to a new screen where you pick from the coins on offer until you find three matching symbols. Depending on your picks, you’ll receive one of the four jackpots – Mini, Minor, Major or Grand.

88 Fortunes from Bally Technologies is a colourful and playful online slot! Everything in the game looks and plays fantastic. The bonus feature seems relatively easy to trigger, but the progressive jackpots are a different story. If you want to have a shot at them, you need to play with the five gold-symbol levels. The RTP of 88 Fortunes is 95.93%.

Now that you know all that’s needed to play 88 Fortunes slots, make sure to claim your welcome offer from those featured at Slotswise and spin for the chance to win excellent payouts!

Codex of Fortune – Read between the lines and win big!

For the developer of this level Miss Cherry Fruits Jackpot Party is a remarkable game that’s made it to the lobbies of many gambling sites....

When it comes to mythology and the fantasy genre, dwarves have always been presented as master miners and craftsmen. Now you have the opportunity to...

Just like the original, this version is a 6-reel MegaWays™ slot featuring Falling Wilds Re-Spins, a Wild on Wild feature, and Free Spins with 3...

Overview Due to its relative isolation, the Yucatan Peninsula was apparently able to develop a distinct culture up until fairly recent times. Since Yucatan’s Mystery...

You may have missed